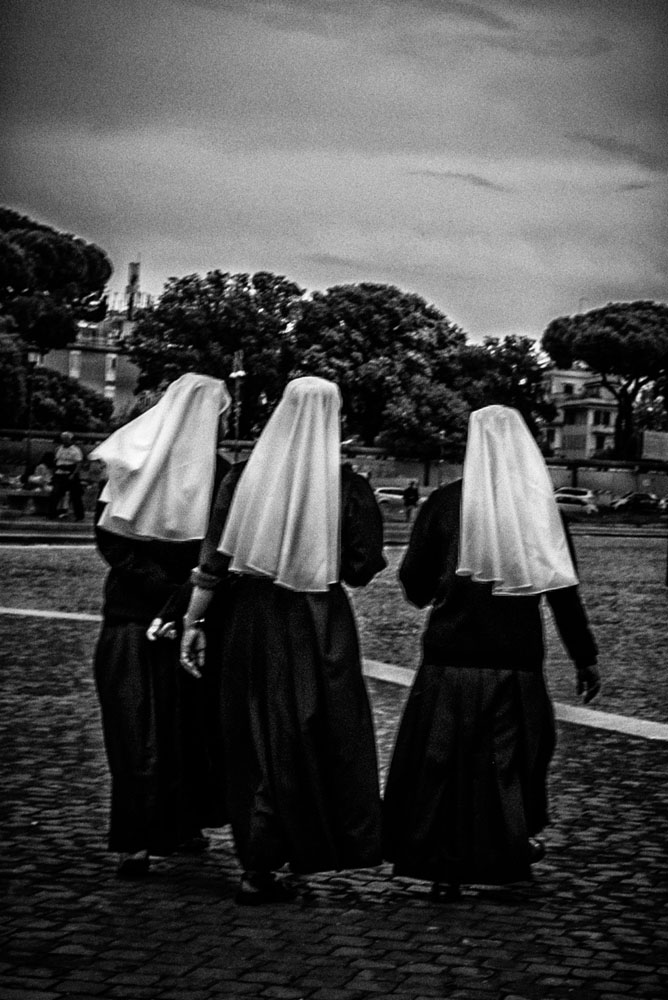 In the moment of capturing a photo lots of brain processing takes place. Depending on the subject and what goes on, I believe in letting the unconscious mind take control, trusting intuition and instincts. Particularly when you play with many balls in the air and when there is plenty of action going on, such as when you photograph on the street, the more you let go of conscious control, the more likely you are to be able to capture something special and out of the ordinary.

In the same newsletter by David duChemin that I referred to last week when I wrote about composition and what is the most important building block for a photograph, he also talks about trusting intuition during the shooting process—or rather not depend on it. DuChemin keenly support the necessity of being intentional when photographing. According to him, it’s the intentional photograph that will grab viewers’ attention, and not the result of the lazy approach of trusting our instinct.

I don’t disagree with him about the need for intention and always asking the question why we want to capture a certain photo. In fact, we may not disagree at all. However, I do trust—and strongly so—instinct and intuition in my photographic approach. Particularly in fast-moving situations, it’s impossible to depend on the slow reaction of the conscious mind.

One of my favourite quotes is by the renowned and ceased Henri Cartier–Bresson. He has stated that thinking should be done beforehand and afterwards—never while actually taking a photograph.

I live by that imperative. Before doing an assignment for instance, I will reflect upon what it is I want to convey in my photographs and how I can put the story I am working on visually together. Those reflections I will bring along when I start shooting, but only in the back of my head. During the actual shooting, I go on automatic mode or rather let my intuition take control. I stop thinking and open my mind to what may come. It’s a state of sensing and reacting. Then afterwards, when I am back from the assignment, I redeploy my conscious mind in the editing process as well as in learning what worked and what didn’t work in the shoot.

I don’t always manage to leave all conscious thinking behind. The result, then, is rather apt to be contrived and less fluid than images I capture with a more intuitive approach. These photos don’t necessarily have that emotional connection that is so important in any imagery. The danger when the conscious mind is in control during photographing is stagnation and replication. When you use what you already know, you will not be able to break out of the known framework of the conscious mind and thus only photograph what you already have done successfully before. Or most likely.

When I manage to transcend the rational approach and instead enter an unconscious flow it clearly reflects in the final result. It happens when I get more emotionally attached to whatever I am photographing and lose myself in the process. I often compare that to tunnel vision as I lose sight of anything else and my mind is completely locked in on whatever I am photographing. I become what I photograph and nothing else exists. For me this is a much more fulfilling process than a fully controlled approach.

For David duChemin, according to what he writes in his latest newsletter, nothing about photography is instinctive. For him it will be the photographer who masters the tools, the craft and all the building blocks that goes into photography—and use them in service of creating something that is the best expression of the wonder we see before us—that will succeed.

Maybe it comes down to how we define and understand the words intuition and instinct. Are they some kind of a seventh sense that we cannot explain? Or are they results of learning processes and ingrained understanding that we use in processing sensory inputs unconsciously? I don’t know. Maybe both. Or maybe not. What I know is that I use the craft, the visual language, the tools and everything that goes into photography, unconsciously in the moment of shooting. After years of photographing and practicing, it’s all ingrained in my memory muscles. The knowledge and the use of it has moved from my explicit to my implicit part of the brain, which is a known fact about how we learn and get better at things. I use this knowledge, but unconsciously. And I let my intuition—whatever it is—decide how to put it all together in the moment of shooting.

I the end I don’t think duChemin and I necessarily disagree. He states, “An intentional approach to photography is not the opposite of the intuitive approach. It’s the prerequisite.” To that I can only agree.

As I mentioned last week David duChemin has a inspiring and thoughtprovocative blog in which he writes about creativity and the photographic process. You find it on his website David du Chemin.

48 thoughts on “The Mental State during Shooting”

For more about me and my work, have a look at my website:
www.munchow.no
Join 23,567 other followers